The Itsa as featured on BBC’s Dragons’ Den

Since making it’s first appearance launch on Dragons' Den way back in 2004, the Itsa quickly went on to prove the Dragons wrong almost overnight and has gone on to sell the quirky beach towel and bag hundreds of thousands of units Worldwide! It's not often the Dragons' miss a trick, but the Itsa was always going to succeed - given it's a beach towel that singlehandedly cancels out almost every frustration you have relaxing on the beach in terms of clever organisation, shear comfort, super-practicality, hidden security and maximum style. 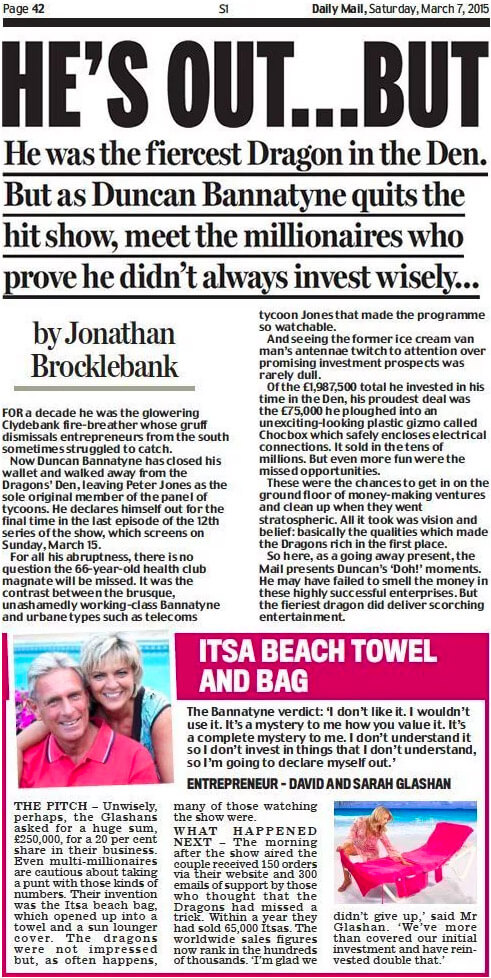 THE PITCH – Unwisely, perhaps, the Glashans asked for a huge sum, £250,000 for a 20 percent share in their business. Even multi-millionaires are cautious about taking a punt with those kinds of numbers. Their invention was the Itsa beach bag, which opened up into a towel and sun lounger cover. The Dragons were not impressed but, as often happens, many of those watching the show were!

WHAT HAPPENED NEXT – The morning after the show aired the couple received 150 orders via their website and 300 emails of support by those who thought that the Dragons had missed a trick. Within a year they had sold 65,000 Itsas. The worldwide sales figures now rank in the hundreds of thousands. ‘I’m glad we didn’t give up’ said Mr Glashan. ‘We’ve more than covered our initial investment and have reinvested double that’.

We love this Itsa sunlounger cover that folds up to become a handy beach bag! It’s a great accessory for your holiday this year, and has pockets for organising essentials such as sun lotion, books and your iPod. There’s even a zipped pocket for valuables.

Dragons’ Den is the BBC’s compelling reality show where bright sparks put forward their new inventions to a panel of entrepreneurs hoping for financial backing. And as often as they find a gem the business brains – who include Peter Jones and Duncan Bannatyne – throw out ideas often with a caustic comment. But even the experts get it wrong, as Lix Frost proved...

The Dragons laughed at ITSA, a beach bag made by computer sundries businessman David Glashan, 54, and wife Sarah, 43, but the Southend couple have made £370,000.

David says: “The idea was dreamed up after my wife lost her watch at the beach. We came up with the idea of a beach bag that opened up into a towel with pockets for books, sunglasses and even an iPod.

I thought we were on to something. We even came up with a slogan: "Everything to hand, nothing in the sand."

We experimented sewing beach towels together and mocked up a product which we had made in China. I had such faith that I committed £300,000 to have 42,000 made.

I saw Dragons’ Den as an opportunity to get some investment and support at the very least, at worst to get exposure. But some of the Dragons were quite scathing. Duncan Bannatyne said he didn’t see the point, would never use it and couldn’t see why anyone would buy it. Theo Paphitis laughed at us.

They convinced us we’d made a mistake and when I saw my pitch on TV, I was horrified. In the editing process I had been made to look a complete fool.

We had already invested more than £96,000 so decided not to let the experience stand in our way.

The next morning our website had received more than 300 e-mails of support from people who had seen the show and during the next day more than 150 orders were placed.

I’m glad we didn’t give up. In the two years we’ve been running, we’ve sold more than 187,000 ITSAs wholesale. We’ve more than covered our initial investment and have reinvested double that."

"We love this Itsa sunlounger cover that folds up to become a handy beach bag! It’s a great accessory for your holiday this year, and has pockets for organising essentials such as sun lotion, books and your iPod. There’s even a zipped pocket for your valuables. The Itsa come in a variety of designs and fabulous colours..."

"If you’re jetting off for some winter sun this Christmas, we’ve found the ideal beach accessory – the Itsa! Beloved by Charlotte Church and Isabella Hervey, the Itsa is a bag that turns into a beach towel – complete with pockets for your book and suntan lotions."

"At the British Invention Show at Alexandra Palace The “itsa” scooped the Double Gold Award for Best International Innovative Product in the leisure category 2006 beating over 120 other finalists."

"We love this... ‘itsa’ have designed this bag that starts as a beach bag, you pull it out of the bag and it opens up, place on the sun lounger, tie it to the legs of the sunbed, and it will then act as a towel but it also has 6 side pockets to store all your bits including a secret one to store valuables. We think it is a great buy for this summer."

"Is it a towel? Well, it’s both called Itsa. And sure to be a hit with sun worshippers – the beach towel doubles up as a bag and a sunlounger cover. After using it to carry your sunbathing gear to the beach, it unfolds into a lounger towel, complete with ties, a side pocket and feet protector. It even has a hidden zipped pocket for valuables when you go for a dip."

"The Itsa is a new beach towel that doubles up as a bag, so you don’t have to trek to the beach with a rucksack or lose your stuff in the sand."

"Bag a smart beach towel. Itsa has a nifty bit of kit to take with you to the beach (or garden). The company’s multifunctional beach towel can be used as a bag before unwrapping it and draping it over a sun bed. As a bag, this clever item has handy pockets for essentials, loops for headphones and a secret zipped compartment for precious things, you can choose from seven vibrant colours."

"Itsa… everything... For a beach essential this summer try the ITSA multifunctional beach towel that doubles up as a bag! The bag folds out to provide a fully fitted towel for your lounger, complete with pockets, feet protector, headphone loops and a hidden zipped pocket for your valuables. Perfect for first class lounging and available in seven different colours to suit your bikini."

"The Itsa is an amazing invention that takes the simple idea of a beach towel to a whole new level. It's a beach bag, sun lounger towel and storage space all in one. The plush material starts off as a simple looking beach bag before it unfolds to become the most efficient sun lounger towel you have ever seen… This really is an invaluable item for your trip to the beach."